Veterans Day and the Poppy Connection 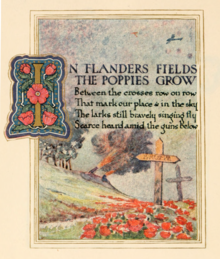 The poppy flower figures prominently in The Canticle of the Black Madonna, as Adam struggles to come to terms with the devastation of the men under his command in a poppy field during a counter-narcotics operation in Afghanistan. As the opera unfolds, the poppy flower becomes increasingly present, both literally and metaphorically, ultimately symbolizing Adam’s transformation and the redefinition of his role as a war veteran.

Indeed, there is a connection between Veterans Day and the poppy flower that extends far beyond the current conflict and the Afghani opium trade, all the way back to the use of “remembrance poppies” to commemorate soldiers lost in World War I. The ultimate origins of this practice are the poppies that littered the battlefields and cemeteries in Flanders, and which inspired Lieutenant Colonel John McCrae to write his famous poem, In Flanders Fields.

In commemoration of Veterans Day, we offer the poem here, along with a well-recognized musical setting, in appreciation of all of the sacrifices made by the soldiers of World War I and all of the many wars that have followed.

In Flanders fields the poppies blow
Between the crosses, row on row,
That mark our place; and in the sky
The larks, still bravely singing, fly
Scarce heard amid the guns below.

We are the Dead. Short days ago
We lived, felt dawn, saw sunset glow,
Loved and were loved, and now we lie,
In Flanders fields.

Take up our quarrel with the foe:
To you from failing hands we throw
The torch; be yours to hold it high.
If ye break faith with us who die
We shall not sleep, though poppies grow
In Flanders fields.