Critical Acclaim for the CBM

Critics have weighed in on the September, 2014 professional world premiere of The Canticle of the Black Madonna. Critical acclaim has focused on the social relevance of the work, the sensitivity with which it addresses combat PTSD, the excellent performances of the cast, and the effectiveness of the text and music. (Full media kit available here.)

James McQuillen, writing for The Oregonian, called the opera “Generous, carefully crafted and supremely compassionate,” and went on to write that “Production values overall reflected artistry, hard work and commitment.” He was particularly taken with the casting of real-life combat veterans as supernumeraries (non-singing actors), noting that “Appearing along with the ancient-sounding choruses were combat veterans in silent supernumerary roles, lending contemporary reality and urgency to the timelessness of the theme,” and concluded that “Contemporary opera is alive in Oregon, and not just that, it’s vital, addressing contemporary issues with determination and compassion.”

Igor Levental, formerly of Opera News and Opera Canada, wrote that he traveled to Portland exclusively to see the premiere of the opera because “I was intrigued by the relevancy of the story and the richness of the music which, combined with a remarkably strong cast of operatic actors, had the potential to break new ground on the operatic stage. And for me, it did.” He went on to write that “There is plenty of dramatic tension in this heartfelt story created by Tiziana DellaRovere whose libretto seamlessly blends with the powerful score composed by Ethan Gans-Morse. The resultant Canticle reverberates with pathos of a Greek tragedy which is further enhanced by the everpresent Greek Chorus that provides sonorous commentary to the proceedings on the stage,” and concluded by complimenting the strong performances of each member of the cast and the high production values and creative work of the design team. 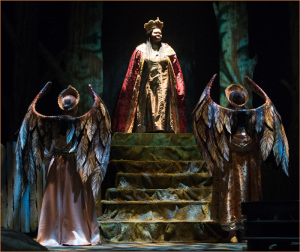 While pondering the serious nature of the opera in a review written for Northwest Reverb, James Bash singled out the strong lead performances of Michael Mayes and Lindsey Cafferky and echoed other critics’ praise for the choral passages as prepared by chorus master Ethan Sperry and led by music director Ryan Heller. Bash wrote that “The style of music for the Black Madonna, angels, and the chorus seemed inspired by the music of the Renaissance and Baroque with the Black Madonna getting several ornamented phrases. The passages for Adam, Mara, and Paul had a contemporary and slightly dissonant feel that conveyed the many turbulent parts of the story very well. The most moving segment came when Adam revealed what had happened to him and his contingent in Afghanistan.” 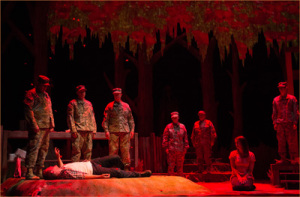 In a feature for OpEd News, Rowan Wolf praised the production’s commitment to the veteran community and to the healing power of the arts in addressing urgent social crises, writing, “I was impressed by the breath-taking sweep of what Anima Mundi Productions is doing with The Canticle of the Black Madonna. It is clear that the aim here is healing, and that for all involved there is a deep sincerity in the loving approach they are taking, and their commitment to art as a vehicle of healing… The Canticle of the Black Madonna is an inspiration whether you are a veteran, related to one, or you are of the general community. There are many things to learn, and many wounds to heal, and The Canticle is a deeply touching vehicle of that communication and healing.” 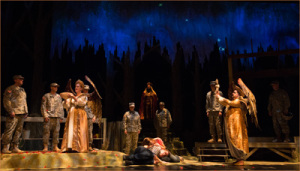 Writing for Oregon ArtsWatch, Brett Campbell hailed The Canticle of the Black Madonna as “One of the most exciting developments of the arts season.” Writing for separately for Oregon Quarterly, Mr. Campbell summed up the response to the opera as follows: “The performances drew unanimous critical praise, particularly for Gans-Morse’s choral writing… [and over the course of the evening] the audience beheld a visual spectacle led by powerful performances by the four professional lead singer-actors and a chorus led by one of Portland’s top choir directors.” Significantly, Mr. Campbell highlighted that “The newbie audience [including military families] and modern subject matter distinguished Canticle from the usual opera-house fare.”

The full text of the above-mentioned articles can be found at the following links: